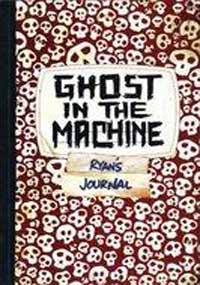 PLOT SUMMARY
The book centers around the main character, Ryan, a sixteen-year-old who has thought he has been seeing things. The book’s beginning was very odd. It starts Sunday, September 19th, after midnight. It’s written in the style of a journal, with handwritten text and ach entry contains the date and time. The story starts with some random cryptic writings, and it’s unquestionably eerie. The first entry  starts with things like “I can’t go down there again,” and “Remove this Cryptix and suffer the consequence.” This tells me that he must have seen a ghost. After the crypt scene, he writes another entry at 7:20 A.M., the same day. It turns out that that whole incident caused him to shatter his leg. Ever since he’s been trying to solve the mystery. He also has a friend named Sarah, who he grew up with, and is helping him. She’s just about as curious as he is. They try not to get their parents informed, otherwise they may be caught or stopped. Ryan thinks even his dad may have something to do with this, so he and Sarah work undercover and investigate.
GENRE
Ghost in the Machine is definitely a horror book, due to the fact that he thought he saw a ghost. I thought it was pretty scary. If I was Ryan, I’d be scared out of my mind.
RATING

I give this book five out of five stars. I liked how it is very cryptic, the writing on the wall and all. This is a very freaky book, so I wouldn’t necessarily recommend it to the smaller ones. Although I did like the book very much.
REVIEWED BY
Rio (Age 10)

"Ghost in the Machine: Ryan's Journal" by Patrick Carman