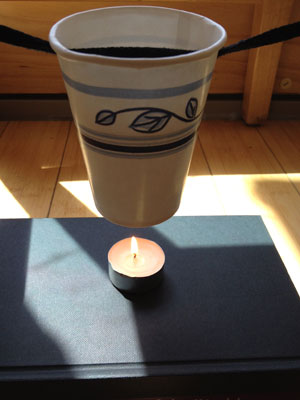 So, we thought we would utilize one of the basic inventions of humankind for this experiment.  Fire!  That said, be sure to have some handy dandy adult supervision available when attempting this experiment.  We started by discussing paper, and specifically the temperature at which it burns.  After a quick web search, we determined that temperature was 451 degrees fahrenheit.  The challenge: Bring water to boil in a paper cup held over an open flame, without burning a hole in the cup.  Impossible? Turns out, as long as the cup does not contain wax (which would draw some of the heat, thereby preventing the water from reaching a temperature hot enough to boil), a paper cup could in fact stand the heat of an open flame without catching fire while transferring the heat to the water itself enough to bring it to a boil.  After some discussion, we determined that while the paper would normally heat up to 451 degrees fahrenheit under normal circumstances, it could not get that hot when there was water inside the cup.
We learned that the scientific principle involved is “Thermal Conductivity.”  In other words, the heat transfers from the paper cup, to the water, keeping the temperature of the cup under 451 degrees fahrenheit while allowing the water to reach a boiling point.  We used the following materials:
MATERIALS
– Paper Cup (to hold the water)
– Water (to fill the cup)
– Candle (to provide the open flame)
– Ruler (to measure the distance between the flame and the cup)
– Shoelace ( to suspend the cup above the open flame)
– Books (to adjust the height of the candle under the paper cup)
– Chair (to string the paper cup over the open flame)
– Scissors (to puncture two holes in the paper cup for the shoelace to pass through)
– Matches (to light the candle)
– Chair (to suspend the cup)

PROCEDURE
This experiment required a LOT of patience!  We first placed the flame approximately 2 inches beneath the cup, which got the water hot enough to release some steam, but not quite hot enough to boil. Next we brought the flame to within 1 inch of the cup, which proved to be too close causing some browning of the cup.  The perfect distance was somewhere in between the two, and after 45 minutes or so of experimentation, voila!  Boiling water, and a perfectly intact paper cup! 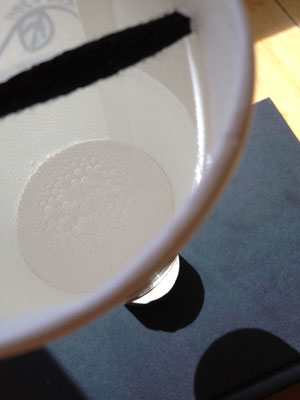 WEB SEARCH KEYWORDS FOR THIS EXPERIMENT
You can find full instructions, videos, and worksheets for this experiment by searching for “boil water paper cup thermal conductivity.” Enjoy, and be safe!